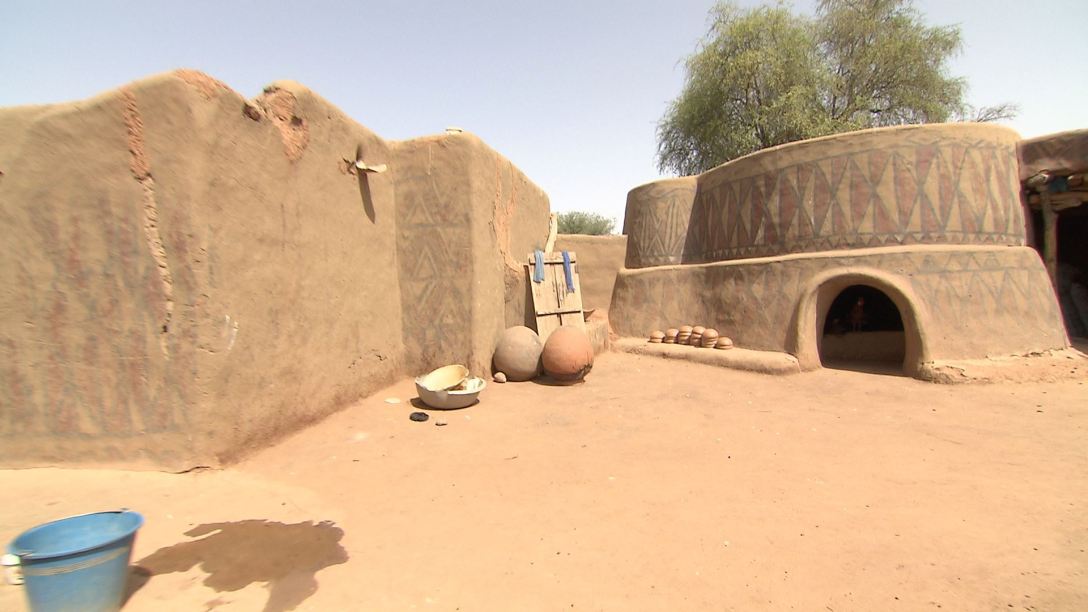 “Give me back my notebooks,” I yelled. Akayuti snatched them from my hand as I exited her room into the courtyard of the family compound. The women of the house materialized and encircled us as if watching a street-fight. The men gathered but kept their distance, backing against the meter-high wall marking the inner section of the house from where they keep the animals. Some retreated to safety on its opposite side. The women laughed and whispered. The children sped about with excitement. I was in trouble.

I begged her to return them. My notebooks contained questions, language prompts, and fieldnotes. I was lost without them. She refused. Baffled, I didn’t know what to do. I’d only been in Ghana a brief time. An older woman had never teased me. I had nothing seized in such a dramatic manner.

“You’re always talking to my husband out there,” Akayuti announced for all to hear, “but now that you have come in and seen the inside of my room, you must give me something too!” She held my notes hostage. The women tightened the circle. I stepped forward. Akayuti backed away. She was adamant.

I shot a confused look to Matthew, my assistant, hoping he would fix this, or at least mediate. He laughed. Perhaps the men against the wall could extract me? They only smiled. This was not their place to intercede.

That month I had spent several hours with Asorigiya, her husband. He was teaching me Nankani culture and oral history. I gave him a small cash honorarium in exchange. We sat in the shade at the front of his compound, a location the Nankani consider a man’s place. I didn’t realize it at the time, but I rarely spoke with the women of the house. They would pass by and we shared greetings, but superficiality ruled. Men joined our conversations, but the women never gathered with us. I was unprepared for a change in everyone’s behavior once I entered the privacy of his wife’s room.

Asorigiya’s son repeated Akayuti’s charge. “You have been inside her room and seen her things. Now you must give her something in return.” No one objected. The solution was obvious.

The first-built and most important structure in the family compound is the woman’s traditional room. Besides being used for sleeping, the room is the center of rituals, particularly those related to the beginnings and ends of life. To enter the woman’s room, one must crouch or crawl through the entrance. The dim interior is cool. The enveloping walls, fluid. Women keep their sleeping mats in the rafters. Medicine items and maternal shrines might rest against a wall. Her clay pots, some filled with belongings, are stacked and calabashes hang from net bags. A stone countertop, smooth from years of grinding millet, is beneath a small hole cut in the ceiling through which a finger of light defines the workspace. The room feels safe and soothing. Thick mud walls mute the external commotion. One cannot deny its womb-like qualities. Lowering oneself to pass through the exit you re-experience the cruelty of birth. Outside you emerge to a surge of temperature, sound, and overwhelming light.

Why didn’t I notice the gendered aspects of these places sooner? The distinction was now obvious. Inside I was no longer in a male place where men’s authority applied. Just as I gifted Asorigiya for his time, I too owed her. This exchange was not all about money. It was a symbolic form of reciprocity. It established a more meaningful connection, a social relationship, and a set of obligations between us. My appreciation of her and her role was long overdue. Akayuti forced our reckoning, confronted my ignorance. I was glad she did.

With a comical display of reluctance, I found a little cash and approached her. She didn’t back away. I lowered myself in deference. We timed our swap, ensuring neither of us snatched the item and ran. Success. The women cheered, and we laughed together. Everyone dispersed.

I moved from the center of the compound, slid over the short wall polished by lifetimes of passage, and hurried outside to the shade tree. Our refuge. The contrasts between gendered places struck me—certain locations increase or diminish one’s authority and freedom according to gender and age. A family compound is a living object and moral space. The house is shaped by and reproduces gendered ascriptions of place, labor, and movement by virtue of its contours and the practices within.

The public and political spheres are associated with masculine virtues. The Nankani link feminine virtues with interiority, the private, and the hidden or obscured. Inside the home, women can act aggressively toward men, an uncommon behavior in public settings. Akayuti could not swipe my notebook or confront me while outside her home.

Matthew explained the gendering of the family compound. “The whole household is always for the women,” he said.

“So,” I asked, “If a man enters the house and the woman doesn’t want him there, can she tell him to go?”

“Of course,” Matthew replied. “When a woman and man are alone, the woman is stronger.”

“That’s when they are inside the house?”

“Yes. Outside it’s the man. You have to be in command when outside. People know that is your wife.”

Ayanobasiya, in a separate conversation, offered a similar view. “When out in the community the man is favored on any occasion,” she said. “The man is more powerful than the woman. If the man says, at any time, get up and cook this food, you must get up, even if there is no firewood. You can’t complain. When we are sitting like this, the man is powerful and can do anything.”

“When do women have the power?” I asked.

“When you go back to your room, if the woman feels angry, she can say that ‘when I was outside you were doing this and that.’ This is because she is cooking for the man. For that, the man may stand aside. If it’s about sex, that is where a woman now has power. The man has to humble himself to have sex.”

Children have the flexibility to navigate between gendered places. A young boy may spend time inside the compound with his mother, but family members will encourage him to sit observing or playing near the men conversing outside. As children move toward puberty, they are expected to spend more time in their respective gendered place, learning the tasks associated with that role. A man explained: “When you are a boy and you are fond of sitting inside it means you are a woman. You have to come and sit and listen to the men speak. It is only the women who are supposed to be there.”

I reflected on the gendered places of my culture and how these also shape our roles and behavior. Think of man-caves, garages, and workshops. As a child, my grandmother chased me from her kitchen. In her home, the only kitchen-related role for men was the ritualistic carving of meat, which involved a needless and inefficient electric reciprocating carving knife and an eager audience.

It is worth taking a moment to observe gendered places and grasp the privileges, expected behaviors, and inequalities related to them. These associations are not “natural” or given. The shock or strangeness of a new place or interaction—in my case, Akayuti confronting me over my inept behavior—can help expose the veiled assumptions and meanings that structure our lives. Once and awhile, we should seek these moments of disorientation. All it takes is a jolt or a second of confusion to prime us to see how we inscribe our world with meaning and how the meanings infused into places and embodied within others accordingly shape us.