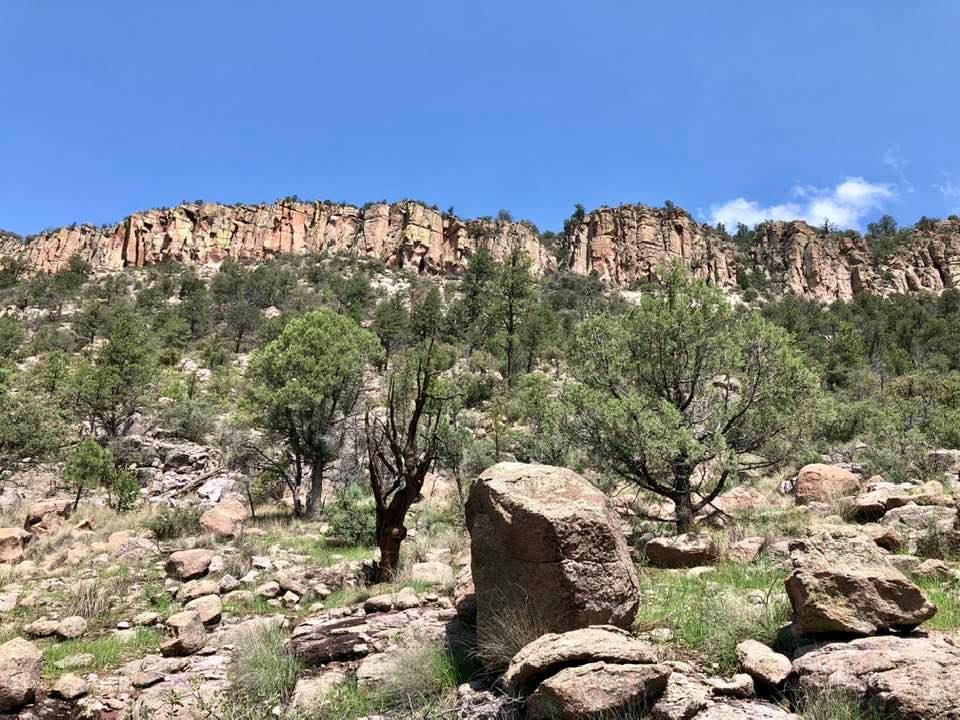 Four miles down a creek in the Gila Wilderness, I noticed a dark opening in the mesa above. The crack towered. It was possible a cave stretched behind. Throughout history, people have visited this area for its small caves and rock shelters. Indigenous cultures, like the Mimbres people who lived here around 1,000 CE, used them when passing through or for hunting camps.

This break in the rock was harder to access than the others. It was out of my way, and I had little time, yet shadows beckoned from just beyond a hot ascent over loose rock and around boulders, a wasp’s nest, and tangled scrub oak and cactus.

The opening greeted me with shade, but it wasn’t much of a cave. It was shallow, though the ceiling stretched above. The ground inside was rough and inclined. Water trickled from the highest corner and disappeared below. It wasn’t a good place to sleep like the shelters I passed earlier. I rested and appreciated the view from the only level spot to sit.

As I stretched to reach my pack, I noticed the pictograph. It faced down from the only accessible flat surface. The artist painted a cross and added eight dots, perhaps by fingertip or thumb. Now standing, I reached and held my index finger over one (being careful not to touch). The artist’s fingertips were broad. Or maybe they applied the paint with a rolling motion, like being fingerprinted. I looked below expecting to see drips of fresh red.

They must be stars, I thought while bending back to consider them—the same posture for gazing at the heavens. I couldn’t recognize a pattern. The cross, however, was aligned within ten degrees of the cardinal directions. Shelia, a friend and artist who saw the photos, suggested the dots could be people or snow, and the cross might refer to the seasons.

Rock art can offer a glimpse into the lifeworld of another person and culture, telling us something, according to Polly Schaafsma, about how they viewed their world and gave it meaning. Images could represent supernatural themes or the business of living—finding food, ordering society, and coping with change. Upon seeing even mundane images, we can’t help but speculate and project our own meanings and ask: Why? Who is it for? What does it depict? Or was it placed to incite change; to manipulate or transform their lives?

Our interpretations likely teach us more about ourselves than about the artists. We’ll never know what most rock art means. But I’m okay with that.

I wonder why rock art captivates me. Its age plays a part. But rarely do old museum paintings engender similar sentiments and questions. Rock art’s power over me is its context and its connection to place.

They say social media enables fast and “free” global communication, collapsing place and the tyranny of distance while connecting more people than any other medium in history. Social media has reach, but it lacks the durability and context that being rooted in a place provides. Tweets and posts are largely ephemeral. Rock art plays the long game. Permanence makes up for its idleness. How many people did this pictograph (and other rock art) reach over the last millennium? How many more will see it in the next?

Standing in this spot, like others before, traces of the past percolate into the now. For many depictions, rock art joins present and mythic times—the era of the first peoples, periods of emergence and migration, the age when humans and animals understood each other. This pictograph bridges, or even bends time, while grounding us in a shared place.

Let’s view rock art as a place-based relational tool. It is a trace that fosters a mutual experience with those who created it and with all who climbed and stood here, legs spent, looking up as if into the stars or lightly falling snow.

Rock art is not a tweet. It’s an earthly growl. As lifetimes of light and shadow continue to shift across its surface, the smooth stone and organic pigments of this medium will outlast us all.